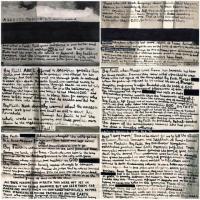 2: by Faith ABEL offered a sacrifice greater than
Cain's and through Faith his goodness was attested. For his
offerings had GOD's approval; and through faith he continued
to speak after death. By Faith Enoch was carried away to
another life without passing through death; he was not to be
found, because GOD had taken him. For it is the testimony of
Scripture that before he was taken he had pleased GOD, and
without Faith it is impossible to please him; for anyone who
Comes to GOD must believe that he exists and that he
rewards those who search for him.
By Faith Noah, divinely warned about the unseen
future took heed and built an ark to save his
household. Through his faith he put the
whole world in the wrong, and made good his
own claim to the righteousness which comes of Faith

3: By Faith Abraham obeyed the call to go out
to a land destined for him / -self / and his heirs and left home
without knowing where he was to go.
By Faith he settled as an alien in the Land promised him,
living in tent, as did Isaac & Jacob, who were heirs to the same
promise. For he was looking forward to the city with firm
foundations, whose architect and builder is GOD.
By Faith even Sarah herself received strength to conceive,
though she was past the age, because she judged that he who had promised
would keep faith; and therefore form one man and one as good as dead,
there sprang descendants as numerous as the stars or as the
Countless grains of sand on the sea shore.
ALL THESE PERSONS DIED IN FAITH. THEY WERE NOT YET
IN POSSESSION OF THE THINGS PROMISED, BUT HAD SEEN THEM FAR
AHEAD AND HAILED THEM AND CONFESSED THEMSELVES NO MORE
THAN STRANGERS OR PASSING TRAVELLERS ON THE EARTH.
Those who use such language show that they are looking
for a country of their Own.

4: Those who use such language show that they are
looking for a country of their own. If their hearts had been
in the country they had left they could have found opportunity to
return. Instead we find them longing for better country -
I mean, the heavenly one, That is why GOD is not ashamed
to be called their GOD; for he has a city ready for them.
By Faith Abraham, when the test came, offered up Isaac : he had
received the promise, and yet he was at the point of offering his only Son
of whom he had been told, 'Through the line of Isaac shall your descendent s
be traced. For he reckoned that GOD had power even to raise form the dead
- and from the dead he did, in a sense, receive him back.
By Faith Isaac blessed Jacob and Esau and spoke of things to come. By
Faith Jacob as he was dying, blessed each of Joseph's sons.
and WORSHIPPED GOD, leaning on the top of his staff
By Faith Joseph, at the end of his life, spoke of the departures of Israel from Egypt, and instructed them what to do with his bones.

5: By Faith when Moses was born, his parents hid him
for three months. because they saw what a fine child he was
they were not afraid of the King's edict. By Faith Moses
when he grew up refused to be called the son of Pharaoh's
daughter , preferring to suffer hardship wit the people of GOD
Rather than enjoying rather than enjoying the transient pleasures of sin.
He considered the stigma that rests on God's
anointed greater wealth than the treasures of Egypt,
for his eyes were fixed upon the coming day of recompense.
By Faith he left Egypt, and not because he feared the King's anger: for he was
resolute, as one who saw the invisible GOD. By FAITH,
he celebrated the Passover and sprinkled the blood,
so that the destroying angel might not touch the first born of Israel.
By Faith he crossed the Red Sea as though it were dry land, whereas
the Egyptians, when they attempted the crossing, were drowned.
By Faith the walls of Jericho fell down after they had been encircled on
seven successive days. By Faith the prostitute Rehab escaped
the doom of the unbelievers because she had given
the spies a kindly welcome.

6: Need I say more? Time is short for me to tell the stories
of Gideon, Barak, Samson and Jeppthah, of David & Samuel
and the Prophets. By Faith they overthrew kingdoms,
established justice, saw GOD'S PROMISES fulfilled. They
muzzled ravening lions, quenched the fury of fire, escaped
death by the sword. Their weakness was turned to strength.
They grew powerful in war, they put foreign armies to rout.
Women received back their dead raised to life. Others were
tortured to death, disdaining release, to win a better resurrection.
Others again had to face jeers and flogging, even fetters and
prison bars. They were stoned, they were sawn in two, they were
put to the sword, they went about dressed in skins of sheep
or goats in poverty, distress, and misery. They were too good for
a world like this. They were refugees in deserts and on the hills
hiding in caves and holes in the ground. These also, one and
all, are commemorated for their faith,
and yet they did not enter upon the promised
inheritance, because with us in mind, GOD had made a
better plan, that only in company with us should they reach
their perfection.
Exhibition history