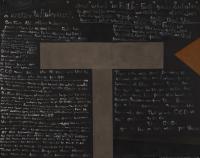 Record number
cm001038
Title
A Letter to Hebrews
Date
1979
Medium
synthetic polymer paint
Support
unstretched canvas
Dimensions
1870 x 2406 mm
Inscriptions
A letter to Hebrews C. McC. OCT. 79 (brushpoint, b.c.-b.r.)
Collection
Museum of New Zealand Te Papa Tongarewa, Wellington
Credit line
Gift of anonymous donors with assistance from the Willi Fels Memorial Trust, 1981
Accession number
1984-0004-1
Extended inscriptions
a letter to Hebrews
By faith ABEL offered a Sacrifice
greater than CAINS, and through Faith his
goodness was attested. For his offerings had GODS
approval; and through Faith he continued to speak after death
By faith Enoch was carried away to another life without
passing through death.
HE WAS NOT TO BE FOUND, BECAUSE GOD HAD TAKEN HIM.
FOR IT IS THE TESTIMONY OF SCRIPTURE That before he
was taken he had pleased GOD
and without FAITH.
and without FAITH
it is impossible to
to please him. for
anyone who comes to
GOD must believe that HE exists and that he
Rewards those who search for HIM.
BY FAITH NOAH DIVINELY WARNED ABOUT THE UNSEEN FUTURE TOOK GOOD HEED AND BUILT AN ARK
TO SAVE HIS HOUSEHOLD. Through his faith he put the whole world
in the wrong, and made good his one claim to the
Righteousness which comes of faith
By Faith Abraham obeyed the call to go out to a land
destined for himself and his heirs and left home
without knowing where he was to go. BY FAITH he settled as
an alien in the land promised him, living in tents as did
Isaac and Jacob. Who were heirs to the same promise. For he
was looking forward to the city with Firm foundations
whos architect and builder is GOD
By Faith even Sarah herself received strength to conceive,
thou she was beyond the age because she judged that he who had
promised would keep faith; and therefore from one man, and one as good
as dead, there sprang descendants numerous as the stars
or the countless grains of sand on the sea shore
ALL THESE PERSONS DIED IN FAITH. THEY WERE NOT YET POSESSION
OF THE THINGS PROMISED, BUT HAD SEEN THEM FAR AHEAD AND
HAILED THEM AND CONFESSED THEMSELVES NO MORE THAN
STRANGERS OR PASSING TRAVELLERS ON THE EARTH.
Those who use such language show plainly
that they are looking for a country of their own.

and what is Faith? Faith gives substance
to our hopes and makes us certain of realities
we do not see. It is for their faith that the
men of old stand on record. By Faith, we
perceive that the universe was
fashioned by the word of GOD, so that
the visible come forth
from the invisible.

Those who use such language show
plainly that they are looking for a
country of their own. If their hearts
had not been in the country they had
left, they could have found opportunity to
Return. Instead we find them longing
for a better country - I mean the
heavenly one. That is why GOD
is not ashamed to be called
their GOD;
for he has a city ready for them
Exhibition history